A short update for today: the attic has been spray foamed!

It looks odd. It feels odd. Each step along the way in this project has changed the atmosphere, but none quite so much as this one. Now, it feels smaller, now that the space between the joists is filled with purple hardened foam. The ceiling seems closer, even though there isn’t actually a difference at all.

On the same day as our insulation appointment, we had a window guy drop by to measure and placed an order for a beautiful, new, functioning, properly framed in window for the space. Installation is already booked for halfway through December.

Once we’ve had a quick visit from the city’s building inspector, we’ll be able to tackle drywall in a serious way. Once the window is in and the drywall is up, we’ve made an executive decision that we’ll be moving our bedroom up, even before the floor and the paint. We’ll turn our attention to the mess that is our main floor, patch the drywall, install the rest of the bamboo flooring, frame in and close up the laundry closet, and build a beautiful set of permanent stairs. Once that’s done, we’ll finish off the last few details in our upstairs space.

And then maybe we’ll take a break for a while.

This Dusty Bookself: Worst. Person. Ever. by Douglas Coupland 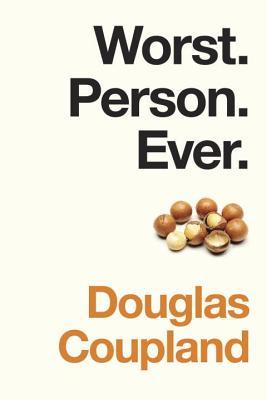 Over the summer and into the fall, my reading rate slowed down significantly. I blame this on knitting. For a long while, I was taking my knitting projects on the subway with me, small and simple things like scarves and hats. This meant books got bumped out of my commuting bag. And, admittedly, I don’t read a lot at home these days. A little, but not a lot.

I managed to get through this one in September, so it’s been a while since I read it. Here’s hoping this review is coherent anyway.

I’ve been aware of Douglas Coupland for a long time but, oddly, I don’t think I’ve read one of his books since I read Hey Nostradamus! in high school. I liked that book, quite a bit, in fact. But, until this year, I hadn’t picked up another Coupland novel.
The title? Well. It doesn’t lie.
Essentially, the book is about a truly slimy character receiving his comeuppance. Raymond Gunt is offensive, cruel, entitled, womanizing, irresponsible, and, well… the worst person ever. The story is told from his perspective as he and a side-kick – a homeless man he hires on a whim as his assistant – travel to Kiribati to work on the set of a Survivor-like reality TV show. Things start out bad for Gunt, and just seem to get worse and worse and worse. Plane ticket mix-ups, arrests, allergic reactions, humiliation, ridicule, etc. etc.; throughout the novel, Coupland piles it on.
You think it would be enjoyable, ‘watching’ a truly terrible human being get what he deserves.
It’s not.
This novel was surprisingly difficult to read. It was, more or less, a worthwhile read. Coupland does a masterful job of creating an unreliable narrator to lead his captivated audience through each fiasco. But as things just got worse and worse for Gunt, all at his own hand, I cringed more and more. I wanted to yell at him to just stop, just stop being such an idiot.
Of course, novels don’t listen.
(Creepy, if they did.)
I won’t ever read this novel a second time. But, that doesn’t mean I wouldn’t recommend it for a first read, especially to those who know a Raymond Gunt. They do exist, but I think we all need a reminder every so often that even they maybe don’t deserve the fate we imagine for them.
What are you reading these days?
(Thanks to Randomhouse for sending me a copy of this novel way back in September! Oof. I’m so behind on blogging…)

When The Spray Foamers Come

I am sitting in a cheap, dog-friendly hotel room with Mocha and Kingsley, doing my best to get a little work done in the unfamiliar environment. The dogs and I have gone for a nice long walk to tire them out for the day. A whole 24 hours in this place stretches before us.

No, nothing drastic has happened to our house. In fact, wonderful things are happening! Today, the attic is getting a solid layer of spray foam, welcome insulation now that November is fully upon us and the temperature has started to dip down below freezing. This is a big step. It means we successfully passed our structural inspection and our electrical inspection. It means that, once the building inspector approves of our insulation job, we’ll be able to hang drywall. It means that finishing up this renovation before Christmas is starting to look realistic.

Of course, spray foam leaves behind fumes. The spray foamers highly recommended that we get the dogs and ourselves out of the house for 24 hours. If we had access to the basement, it wouldn’t have been nearly as big an issue, since that space is far enough away and well sealed off, but as most of you know, we rent that space out. Not an option.

Our original plan involved a PetSmart or other dog kennel for the day and a single night in a dog-friendly hotel. Unfortunately, when the husband called up our vet to get proof of our dogs’ vaccinations, we learned that, oops, Kingsley is a measly 15 days overdo. He booked our boy’s appointment for Wednesday, but it didn’t help for our plan for today. So, a little rejigging of our schedules, and here I am, working from ‘home’, in an outdated hotel room, snuggled in with our pups.

So, what’s left in our attic?