Newborn Essentials (When You Already Have A Toddler) 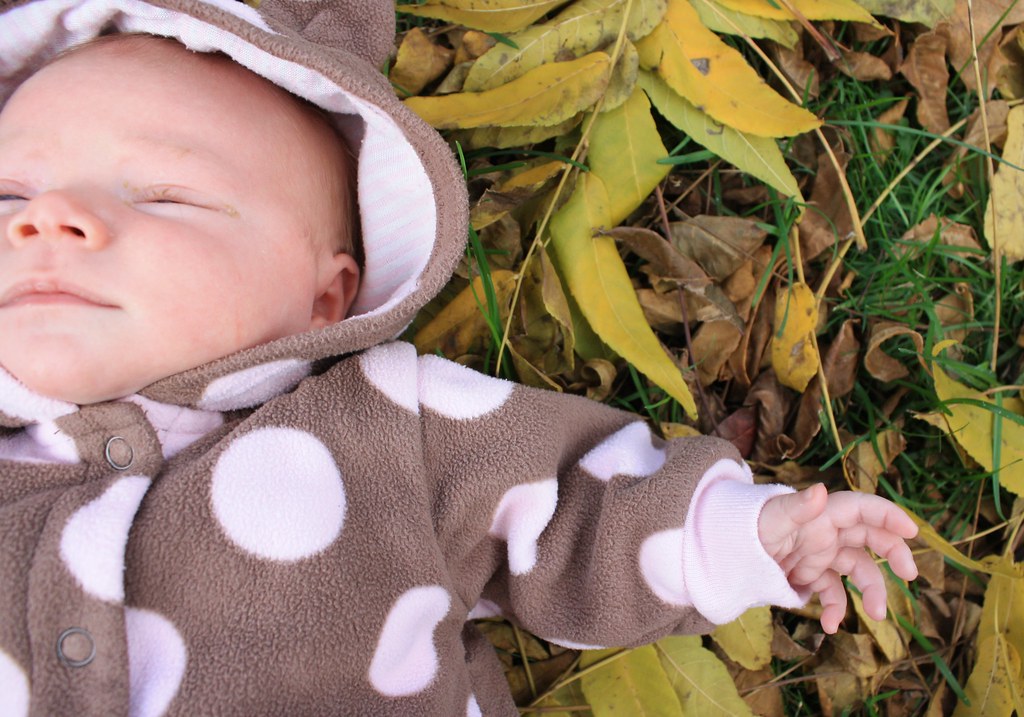 Eden is one month old! I feel like this is something to celebrate. We have survived! Slowly, we’re digging ourselves out of the newborn haze. I will not deny it: the past month has been hard. I feel the distance growing between Isabel and me, and spending so much time in constant contact with another human being leaves me feeling drained by the end of our long long days.

And then, there are the days that never seem to end, dragging on through the night, punctuated by Isabel’s calls for daddy – she doesn’t call for me anymore, knowing I’m not going to come – and Eden’s noisy sleep sounds, squeals and grunts and rattly, slightly congested breathing. No. This month hasn’t been easy. 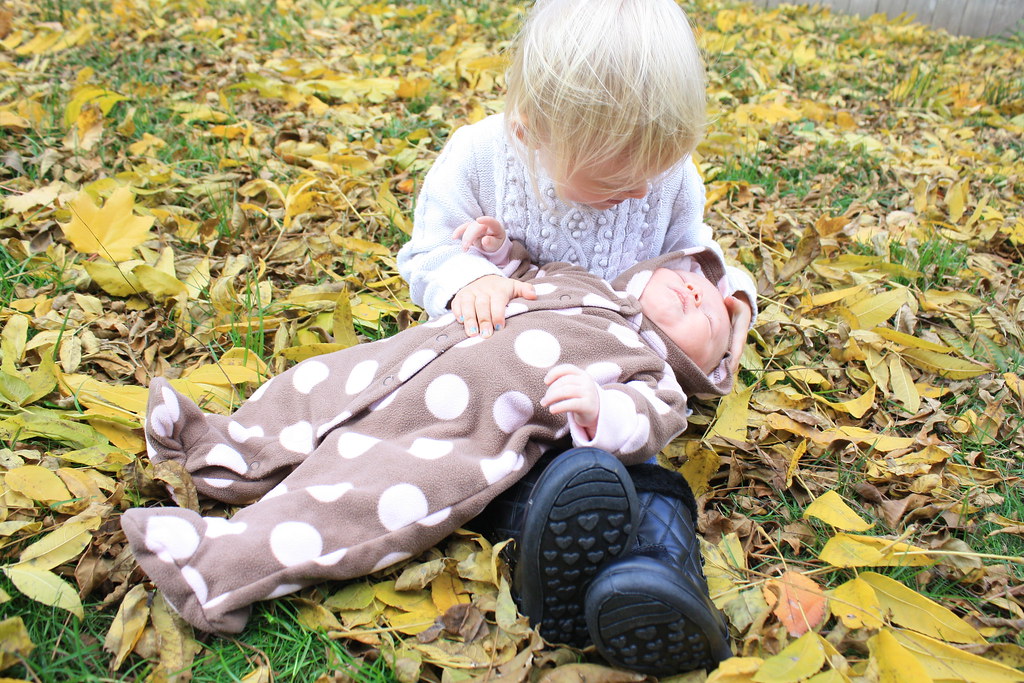 But, there are a few things that have made it easier, and in an effort to be useful, I thought I’d share those things.

Swaddles, specifically ones that help you wrap those little arms in. Eden sleeps so much better when she’s well swaddled, especially if I want her to sleep in her crib.
A swing for Eden. For a week or two we tried to put her down in the bassinet of her playpen whenever she slept and we felt like we needed a break. But, after her first two days of life, Eden made it pretty clear that she is not fond of lying on her back. We set up her swing instead, and she’ll sleep there, contentedly, for an hour or two, which gives me a much needed break. The swing is, however, much more easily accessible to Isabel than the playpen, which has caused some issues.
A comfortable carrier. We use a Boba 3G, which doesn’t require an infant insert, and instead folds to the size of a newborn. I also DIYed a ring sling, but I have yet to figure out how to make it comfy enough for long periods of wearing. Eden spends hours cuddled up against my chest, morning, afternoon, evening. It puts her to sleep pretty much every time I tuck her into it, and it’s helped a lot with my ability to bond with her, while spending time chasing a slightly wild toddler who has started to occasionally act out.
(While it’s been phenomenal from a practical standpoint, helping us get through our days, carrying Eden has also been surprisingly difficult. I am rarely not touching someone. By the end of the day, when Isabel finally goes to bed, and I am craving a break, Eden is often just getting started. There are no breaks.)
A tablet. I debated including this one because I don’t love the idea of toddlers and excessive screen time. But ultimately, I’m not sure I would have made it through this past month without our iPad. Having a tablet really helped get us through the first hard couple weeks. Handing the iPad to Isabel allowed me to spend the time I needed nursing Eden, changing Eden, bouncing Eden, cuddling Eden. We are now starting to cut down her screen time as I have developed new coping strategies, but in those first days, it was invaluable.
A library. For books and storytime and a first effort to return to real life. Reading is one of the few things I can do with Isabel while nursing Eden, so we do a lot of it. We go to the library weekly, hang out at storytime, and then grab a stack of 10-15 books off the shelves for our weekly reading. My toddler loves books and, as Eden wedges herself between Isabel and I, it’s one of the ways I have found to maintain and grow my relationship with my firstborn. We snuggle and read, and for a little while, our little world feels very full and warm.
A cozy couch. A stack of books would be useless without a comfy place to cuddle up with them.
Playgroups. I am fortunate to have a wide range of free playgroup options in the area for Isabel. If you’re in Ontario, you probably have them too, through the Ontario Early Years program. These programs have allowed Isabel to get out among other children, burn some energy, and maintain a sense of routine, which makes everyone’s lives easier. We do storytime at the library on Monday, coffee break at our local church on Wednesday (a break for me too!), a playgroup at a different local church on Thursday, and nature play at the conservation area on Fridays.
Enough counter space for all the dirty dishes. Just leave them. Seriously. Snuggle your baby. Take a nap. Have a shower. Build a train track with your toddler. Go for a walk. Do them later when you have more energy, or when they really start to drive you nuts. Dishes can always wait. 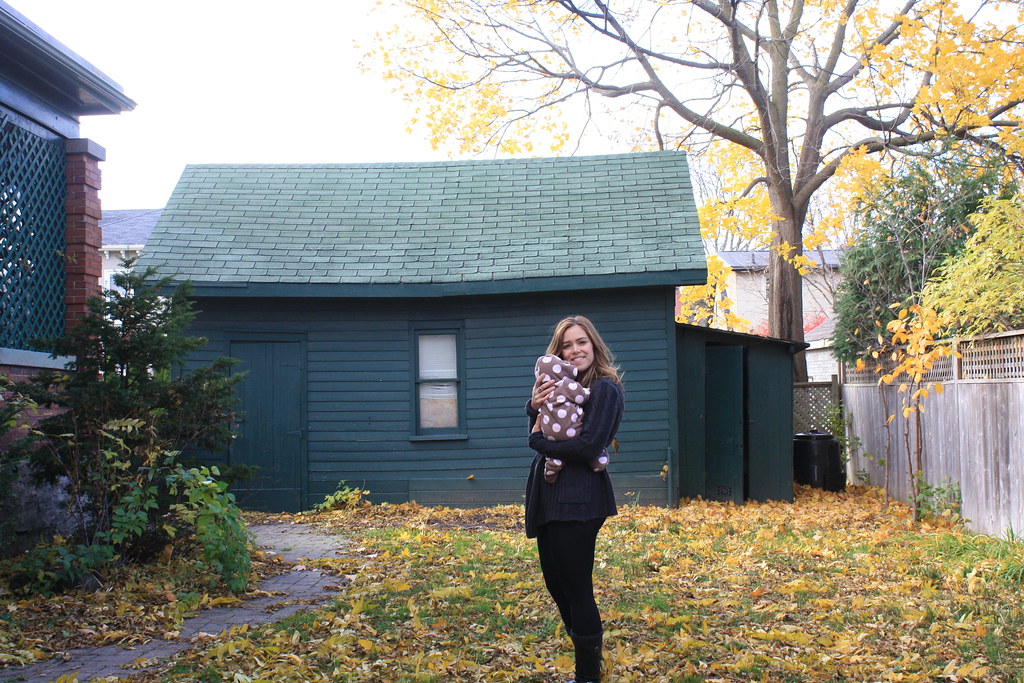 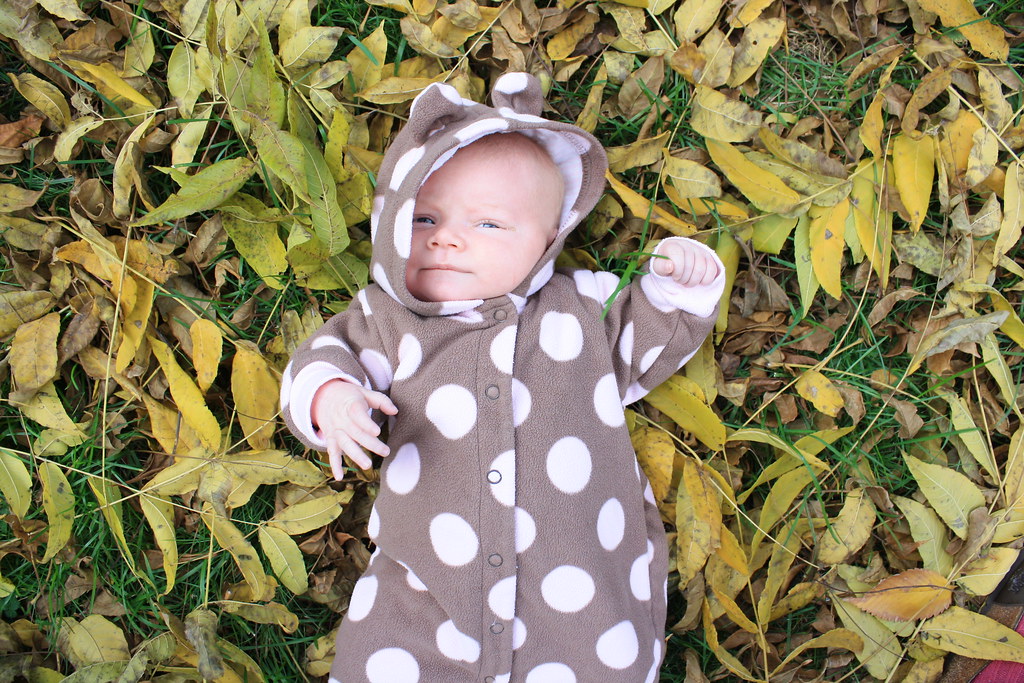 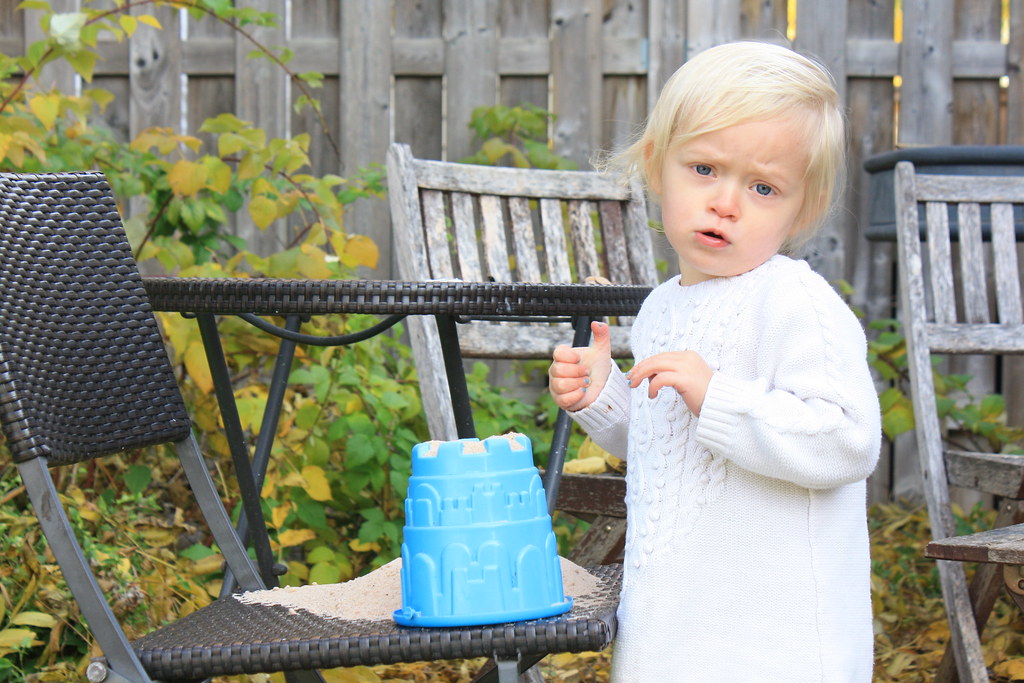 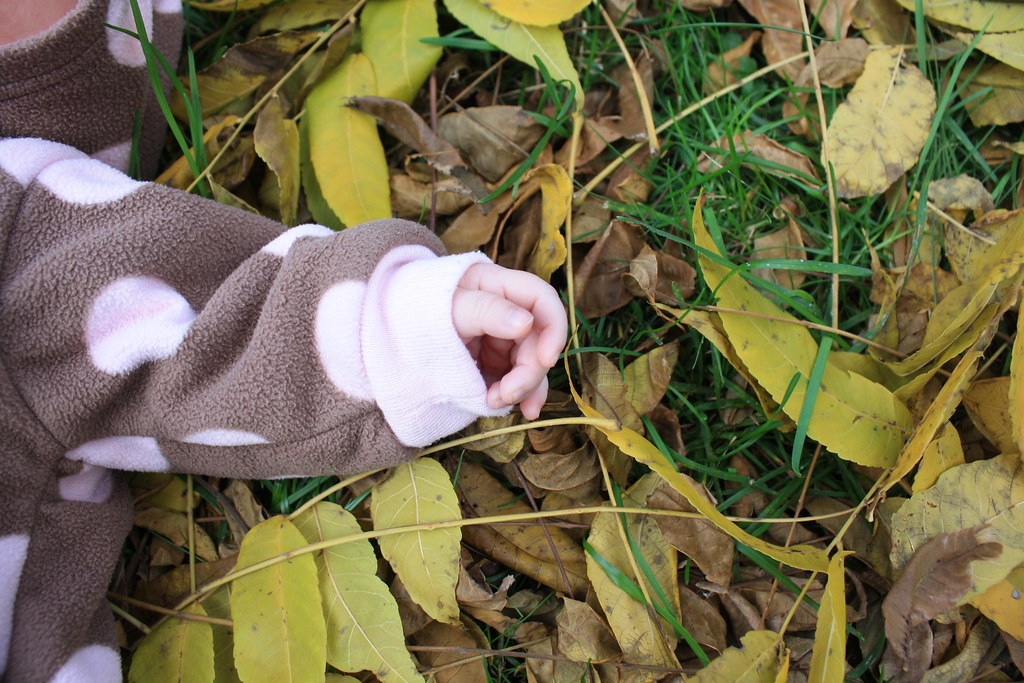 Ultimately, be gentle with yourself. Do what you have to do and know that every hard thing you’re going through during the first few days and weeks will not last and things will get better. 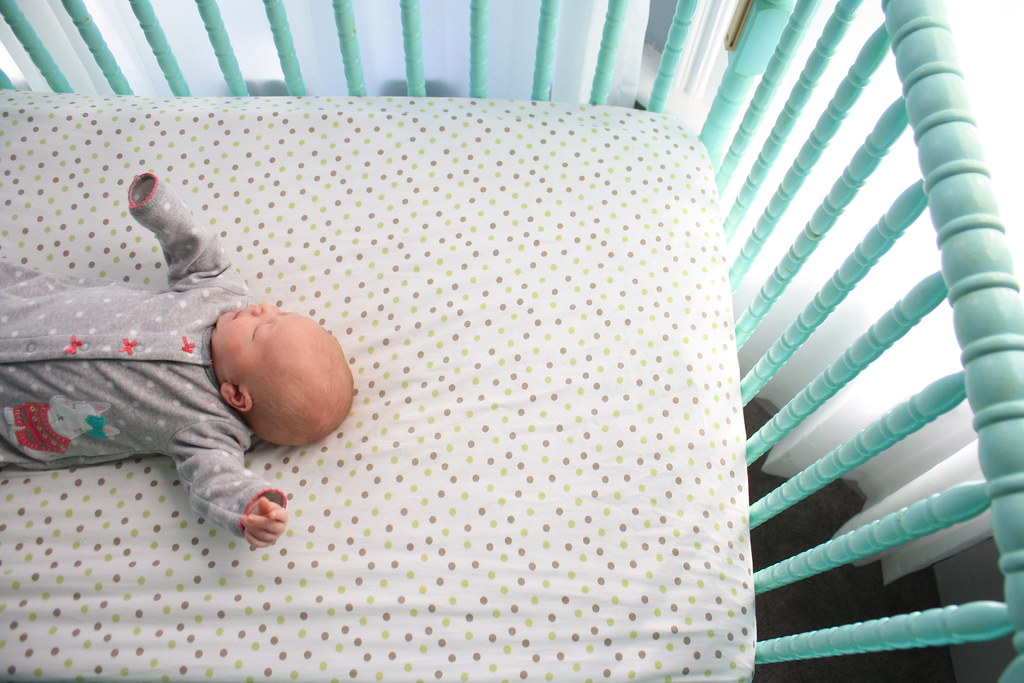 It feels like a parenting faux pas, but I can’t help but compare my two girls in their first weeks of life, and my experience of them. I know I probably shouldn’t compare, but it’s hard not to when the adjustment from none to one was so different from the adjustment from one to two. I have regularly heard moms muse on what adjustment is harder; now I can answer the question for myself. Without a doubt, this adjustment has been far easier.

Two weeks after we brought Isabel home almost 2.5 years ago, I remember sitting on the edge of our bed with a cluster feeding baby in my arms and bursting into tears. Mark was soon going back to work, we had yet to introduce a pacifier due to a fear of nipple confusion, despite breastfeeding going remarkably well, and Isabel hadn’t settled off the breast for hours. I sat on the edge of that bed, wondering through the tears I couldn’t stop what the hell we had done to our lives. In that moment, our lives as a childless couple seemed idealistic and comfortable and utterly lost, while the future ahead seemed exhausting and filled with difficulty.

This time around, I believe I am emotionally stronger and more confident in my parenting choices. We’ve introduced a pacifier – though Eden seems completely uninterested in taking it. We’ve embraced bedsharing – a move we didn’t take until 6 months or so with Isabel – in the interest of getting as much sleep as possible. We’ve been returning to real life and routine far earlier, purely out of necessity. 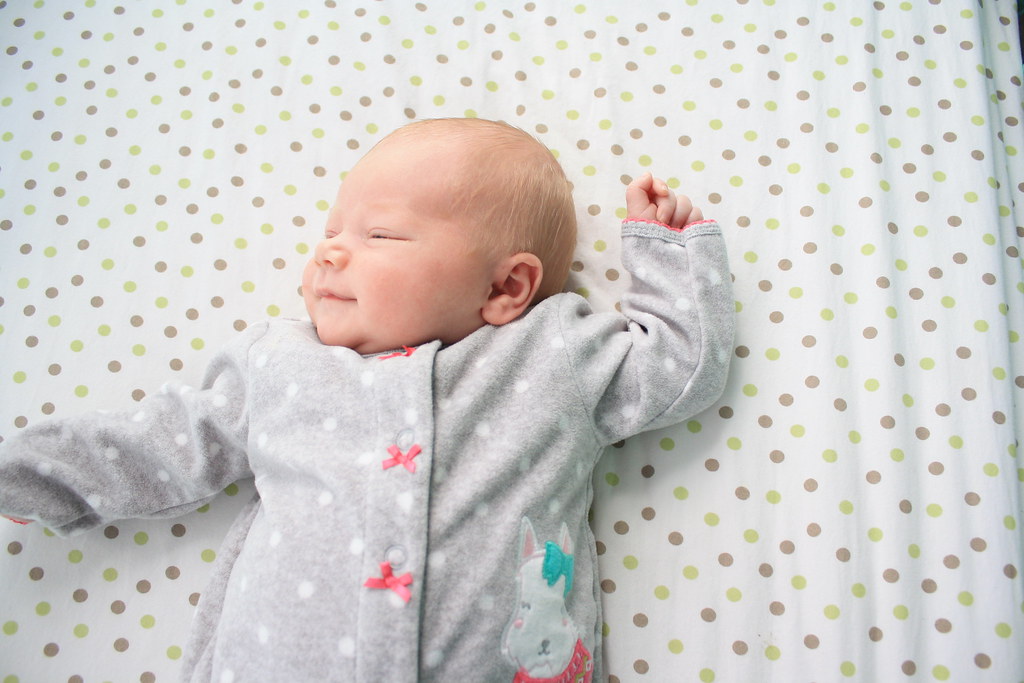 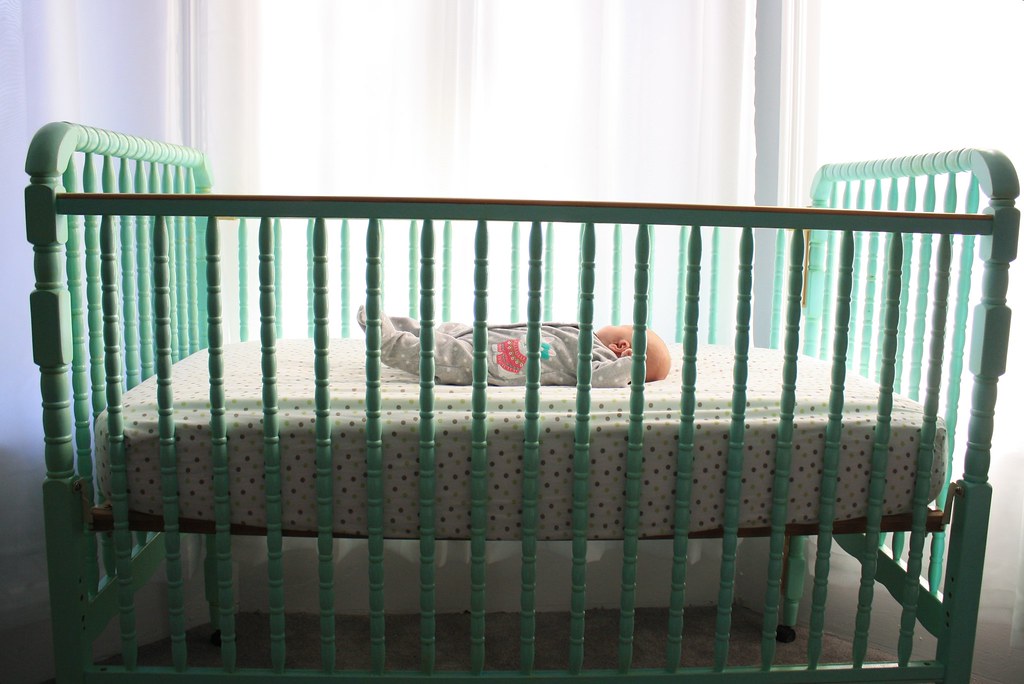 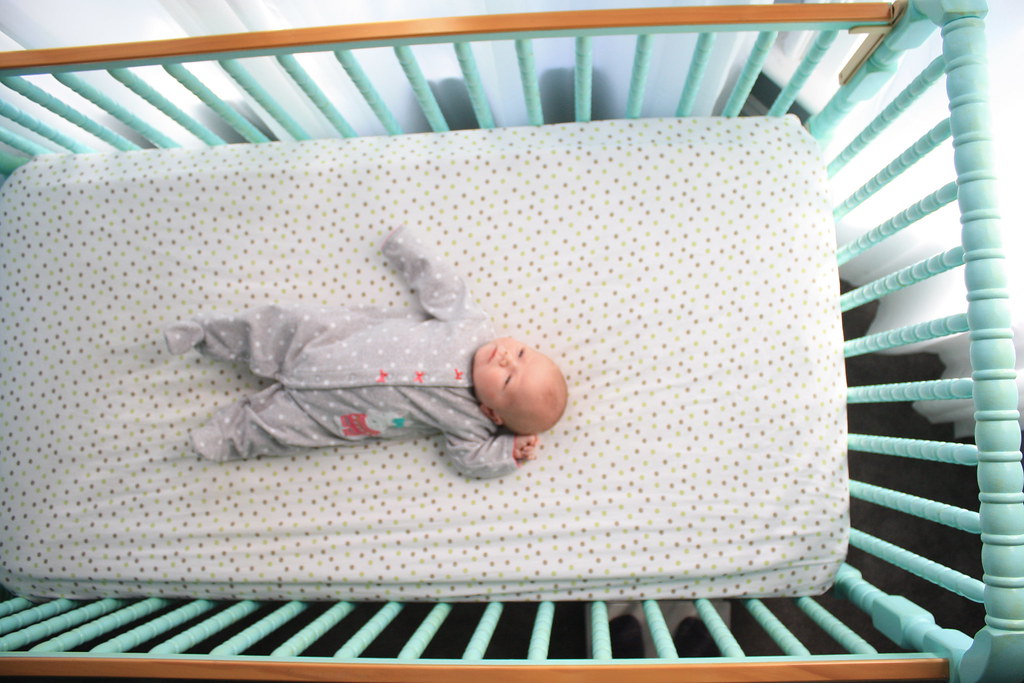 But Eden is a different baby than Isabel was. In her, I see the needs of the fourth trimester far more clearly than I saw them in Isabel. Eden does not stay asleep unless she is touching me. She will not lie on her back, and if she does, she sleeps noisily, grunting and squealing until she wakes after just a few minutes. Even our swing can rarely keep her happy for longer than 10 minutes. She adores being carried in a carrier, or just tucked in my arms as Isabel and I read books on the couch. While she craves closeness with her mama, she doesn’t comfort suck in the same way her big sister did as a baby, which makes soothing both easier and more difficult.

While we have handled the change in our family remarkably well, it hasn’t exactly been easy. On the first day that I was on my own with both girls, I found myself sobbing as I read The Blue Hippopotamus to Isabel, my big girl tucked in her bed, my little girl squalling against my breast. Never again, I realized, was I going to have the luxury of lingering over books with Isabel, reading to her until she fell asleep against my shoulder. Nap time was no longer going to be the sweetest time of our day.

That was a mere four days post-partum. My sense of loss has held true. Nap time isn’t easy. But, every day, she still naps, and every day we’re finding other sweet moments to cling on to instead. Every day gets a little bit easier. 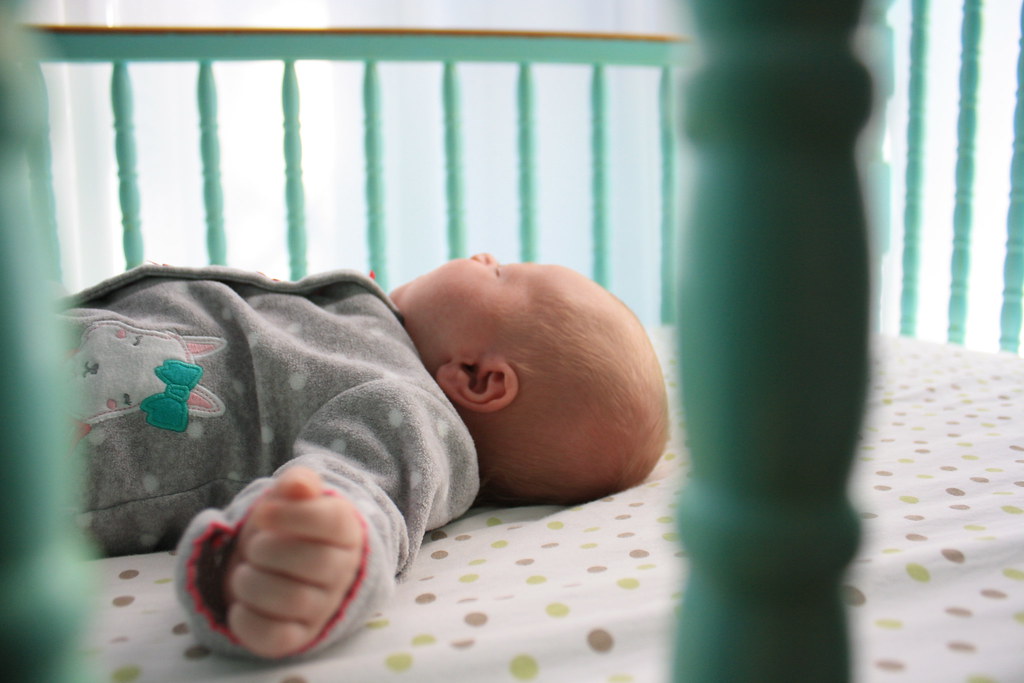 A Victorian House Tour: A Dining Room Fit For A Feast 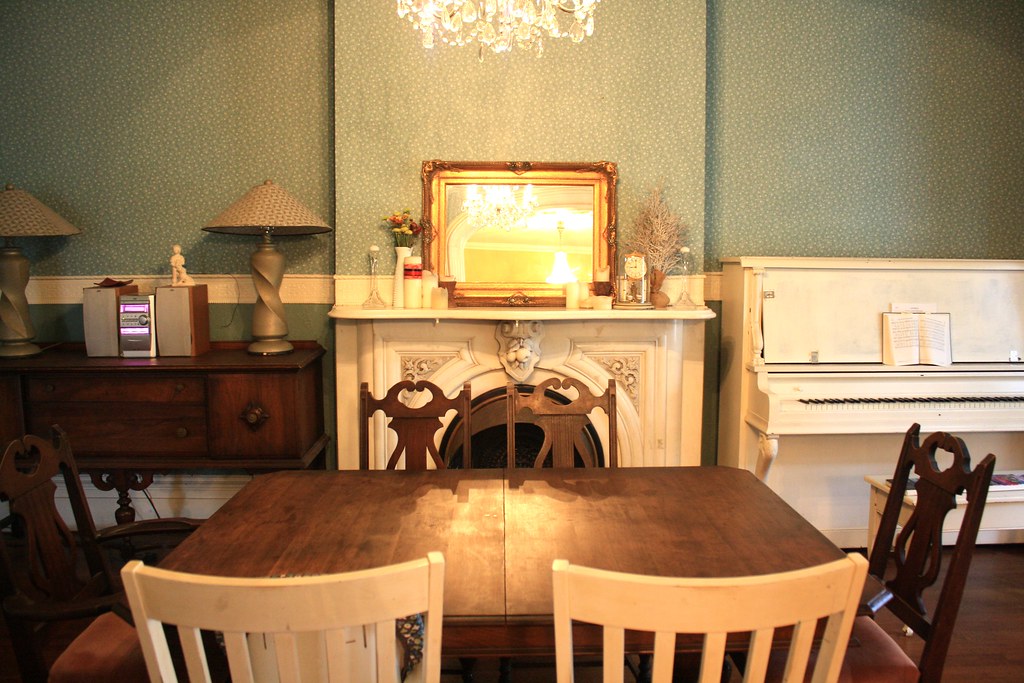 When this house was built, sometime around 1860, someone had their priorities straight. The dining room is as large as the living room and clearly designed for entertaining, complete with a door to the kitchen just for the servants to use. The original main fireplace is here, so it would likely have been the warmest room in the house, especially on the coldest winter nights.

I don’t love this room yet. There’s a lot I want to see changed, though we have neither the time, nor the funds to tackle the list yet. For now, it functions as it needs to and there will be time and money to tackle our projects later. For now, we are spending a lot of time thinking and dreaming about what this dining room space could be. For now, we will learn to love it as it is. 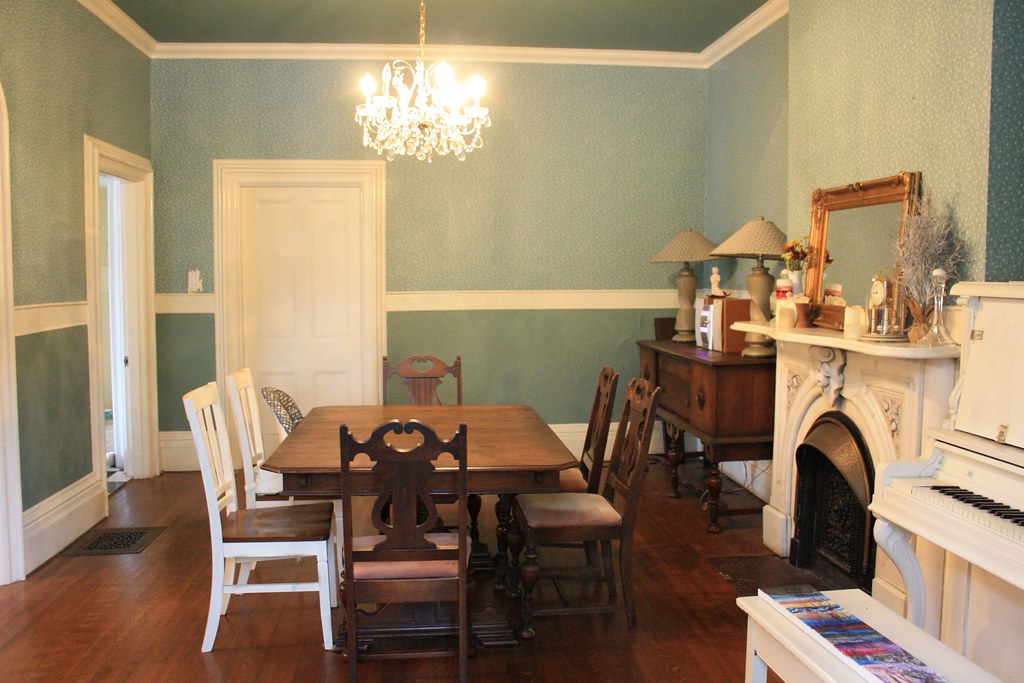 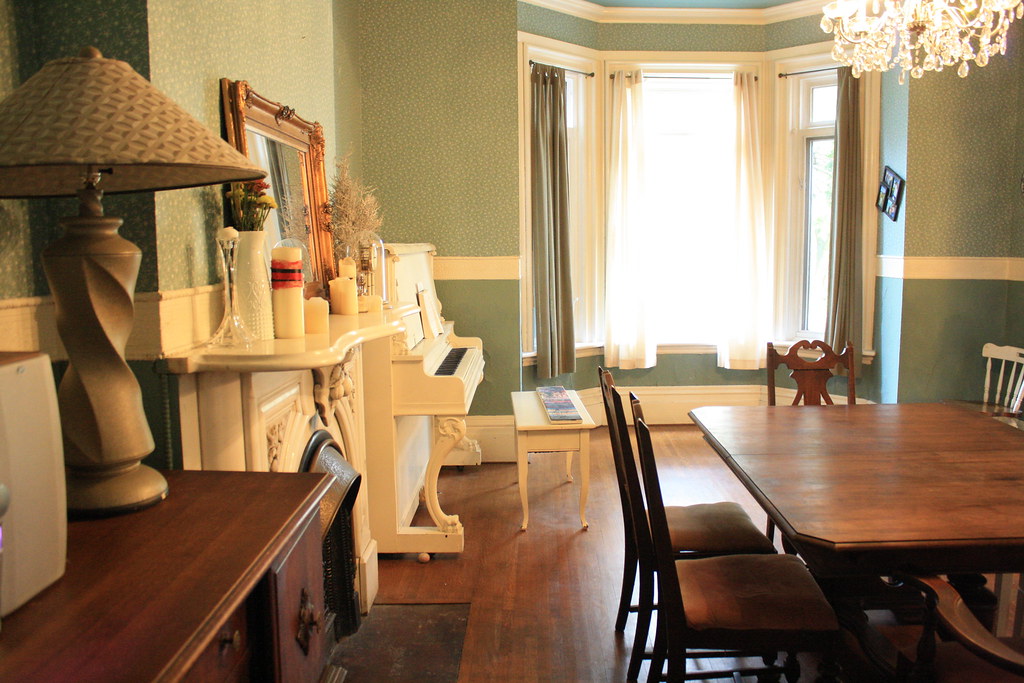 The walls. I like the theory behind the walls – slightly different pattern on top and bottom and a decorative whatever-it’s-called, chair rail? down the middle. But, the wallpaper is crumbling, particularly the wall paper on the bottom, and some of it is not lined up particularly well. The colour is also a little dark, especially in combination with the dark, painted ceiling. This room and specifically these walls will likely be our first priority when it comes to renovations and improvements.

The furniture. I mean, I kind of like the furniture, but I also kind of don’t. All of the furniture in this room came with the house. The seller went back and forth a little bit about whether or not the furniture would be included and ultimately, I wonder if it would have been better had we unlocked the door to an empty dining room instead of this heavy antique furniture. Coming from a tiny house of 900 square feet, we didn’t actually have enough furniture to fill the house, so having it is helpful, but it has made it a little more difficult to feel at home in this room. It’s not our furniture, so it doesn’t feel like our dining room. I’ve thought about taking a paint brush to some of the furniture, particularly the sideboard, but then I wonder if we should just plan to sell it all instead.

The fireplace. Ok, actually, I love the fireplace. But, I think the apple at the centre underneath the mantle is a little weird, and the whole thing has been a bit abused. It’s well stained and well scratched, which is hard to fix since it’s beautiful white marble. 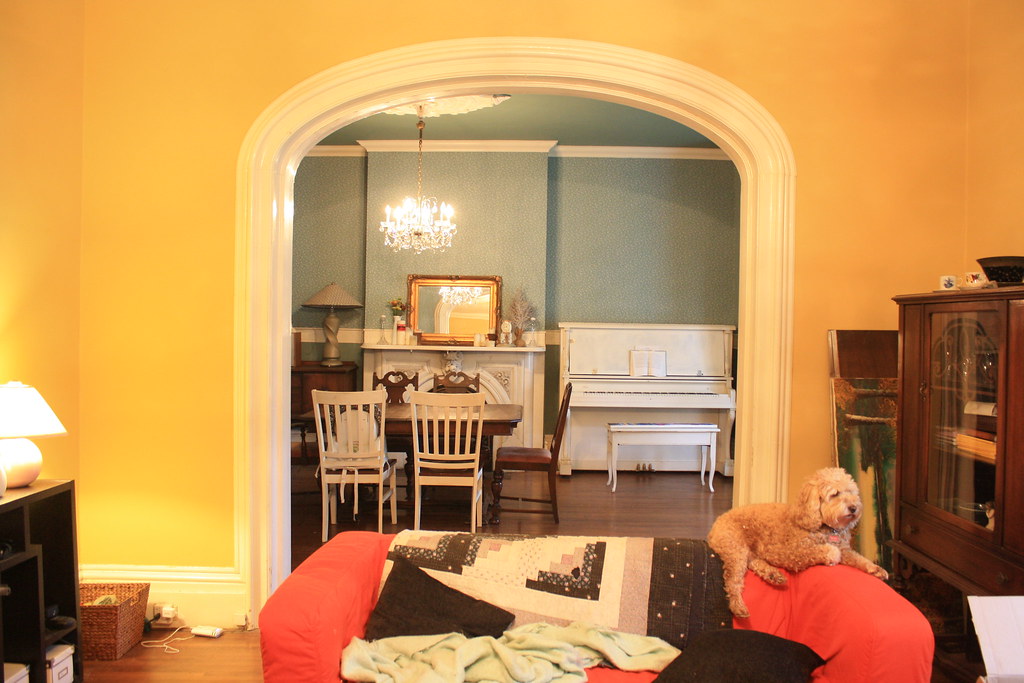 Living room next! Though, I’ll admit, its hard to get the living room – or really, any of the remaining rooms in our house – neat enough to be photo worthy, so I have no idea when I’ll get a chance to clean and share. I’m not the only one who can’t seem to get her house universally tidy, right?